Musings about cooking, eating and everything in between. 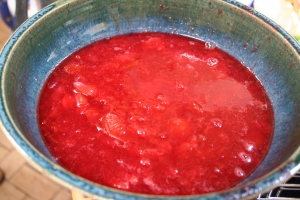 Yesterday we started processing the plums I mentioned in the previous post. We are making very simple plum preserves – not jelly or jam. The primary difference is the sugar content and the end consistency. Preserves are basically cooked fruit with a bit of sugar, whereas jam and jelly requires a thickening agent.

In order to make the preserves we simply halved and pitted the plums yesterday, then we layered them with sugar and let them sit for about 8 hours. We cooked them a bit last night and then refrigerated them overnight mostly because we didn’t have time to can last evening. This morning we took them out and put them back in the pot, added a bit more sugar as they were pretty sour, and then put them on a low heat in order to thicken and cook down a tad more as there were still some pretty big chunks of plum.

This is really a very long lead up to the near tragedy that occurred this morning shortly after I placed the plums on the heat to cook. We had just arrived home and of course, some chickens had escaped and one of them was hiding so we (mostly I) got completely sidetracked looking for the rogue chicken. Then my two year old started having a melt down and I basically neglected the plums.

I came back in and went to stir them only to discover that I had completely scorched the bottom of the pot! I was in near tears…okay, I was in actual tears…because I was convinced I had ruined the entire batch. So much time and effort and work…from picking them to washing, to cutting to cooking…etc.etc…and here I had ruined them in a vain effort to find a damn chicken.

Luckily for me my mother is slightly more level headed and we simply ladled the top of the jam off into a bowl and dumped the scorched part. We only really lost about a quart – which sounds like a lot, but we still have over a gallon which will make lots of preserves.

Suffice it to say, the pot of plum deliciousness is now sitting on the stove over a VERY low heat and is being stirred constantly. The picture is of the plums as we were ladling them off the scorched pot – the color was so beautiful I wanted to capture it.

2 Responses to “Plum Preserves – Near Tragedy!”